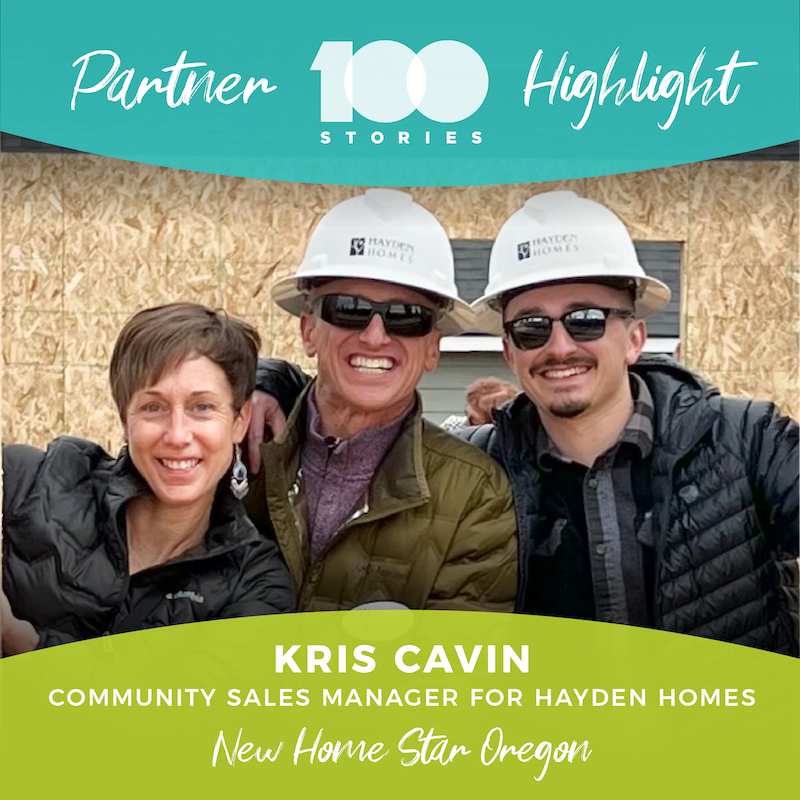 For three years, First Story has worked alongside local Central Oregon nonprofit, NeighborImpact to welcome eight families home to Sisters, Oregon. In April, First Story raised the walls on a very special home, a home that marked the completion of this particular initiative. To celebrate the occasion, First Story brought together nearly 100 Hayden Homes, New Home Star, and Simplicity Homes employees, as well as First Story founder Hayden Watson, Mayor Michael Preedin of Sisters, City Council Members, and more. The energy was infectious, and the street was filled with smiles and laughter as we all worked together to start a new family on their homeownership journey.

Every wall raising is special, but this one included a surprise for NeighborImpact. In addition to the project in McKenzie Meadows, First Story works closely with NeighborImpact on all its homes in Central Oregon, utilizing their home buyer education and self-sufficiency program for all First Story recipients. As a thank-you for their years of support to First Story homeowners, First Story organized a Team Build 4 Kids as a part of this wall raising – a donation drive for diapers, books, crafts, and interactive toys for NeighborImpact’s Head Start and Early Head Start programs. They selected team captains from Hayden Homes, Simplicity Homes, and New Home Star to drive donations from their colleagues and lead the charge. When it came to who would lead the New Home Star team, they knew they could count on Community Manager Kris Cavin. Kris’ infectious energy caught on and inspired all the teams to bring their A-game, resulting in over 60 bags of donations!

Of course, it’s not surprising that Kris took such a strong lead. His family has been connected to, and supportive of, First Story for a long time. Kris explained that while you may make financial contributions, and know they’re making a huge impact, when you see a wall raising or dedication video on First Story’s social channels you just want to be there and feel those effects yourself. After moving to Bend and joining New Home Star, Kris took full advantage of the opportunity to give in a different capacity. “When you actually go and raise a wall with the family and your fellow employees, it doubles your impact.”

The Team Build 4 Kids was something Kris’ entire family got behind. His wife and son helped load up trucks full of donations and joined in the raising of the walls. At one point, he remembers ending up shoulder-to-shoulder to his wife and son as the first wall was going up, “It was a big deal when we raised that wall. It just happened to be that we were at the window and someone snapped a picture.” For Kris, nothing beat being able to give back together and share in that moment with his family. So don’t be surprised if you visit Kris and see that photo framed in his home, “it had quite an impact on me.”

When asked for some parting words for people who, like him, wanted to get more involved, Kris said “Just do it. That’s the most important thing. A lot of people say ‘I can’t give because I can’t give a lot’ but that’s okay, you can give as you go, just a little bit at a time.”

100 Stories No. 49: Supporting Bend's Diamonds in the Rough

As Claire, Kisky and the First Story team ramp up work for our annual fundraising event, right alongside us you’ll find a crew of bright, motivated young people who know how to roll up their sleeves and get to work.

Now in her fifth year at Hayden Homes, Katy Wooderson, Vice President of Marketing, is at the heart of telling the story of the special connection between

In 2010 when Builders FirstSource first got involved with First Story,it just felt like the right thing to do...