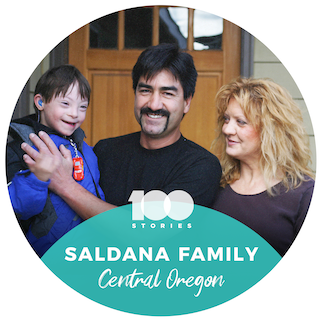 For First Story’s very first homeowner, Robert Saldana, it’s not surprising at all that First Story is celebrating its 100th homeowner.

“When they get all the builders in on it together, it helps them, and it’s also doing something great for the community. It’s pretty straightforward and simple to see why it works. It’s a great program,” he said.

Back in 2002, Robert and Lorraine had five children: Their son Tristan, who was born with severe Down’s Syndrome, and Lorraine’s four teens. They were living together in Lorraine’s home, on a two-year self-sufficiency rent-savings program, designed to provide funds for a future mortgage down payment. Dejected after their first offer fell through, Robert received a call soon after about a new program (then called the Hayden Giving Fund), and the stars aligned.

Would they be interested in applying to purchase a low-cost home at zero interest, with no down payment?

“I said, ‘What?’ It was hard to believe,” Saldana recalled.

Thanks to his hard work ethic and strong credit, Robert was chosen to be First Story’s first-ever homeowner. “When we got the call…Robert was in disbelief,” said his wife, Lorraine. Twenty years later, the benefits of the program have shaped their lives.